(I normally don't post blogs both places, but I know some of my followers here haven't made the leap to the new blog yet.  I feel like this topic warrants a double post.)

A couple of weeks ago, I scheduled a doctor's appointment but felt uneasy about it. I've been having issues for the past few months, but wasn't confident that my doctor (who I love and think is fabulous) could really help. That particular Monday was an especially bad day, leading me to finally break down and call the doctor.

My appointment was scheduled for 8:30 the next day. I don't know how it works with your doctor, but appointments are never obtained that quickly with mine unless there is bodily fluid oozing out of an orifice.

In the waiting room, I was the first patient to be called back - despite the fact that others were there before me. The normal nurse was out for the day, and the fill-in chatted me up, helping take the edge off my nerves.

Then it was my turn with the doctor. I told her my WebMD diagnosis and waited for her to agree with me. Instead she asked my symptoms. I twisted my hands as I explained my problems have been more intense the past few months, but I suppose they’ve been around for a while now.

Family history was then discussed. I always knew it was a problem most of my family had, but I had never considered it to be significant enough to mention to the doctor. After only providing 3 examples, she interrupted.
Please continue reading at the original posting site...
Posted by Brooke at 8/01/2012 08:33:00 AM No comments:

Just wanted to let you know that I've got the new place up and running!  Come check it out: http://frugaltrophywife.blogspot.com/  Please add it to your reader if you want to follow me.  I will NOT be redirecting the followers from this blog to the new one.

I've changed so much as a person since starting Smart + Strong = Sexy and want my blog home to reflect that.  Instead of trying to redesign this one to "fit" me, I thought I'd just start clean.  Please let me know what you think!

I'm still in need of good "about me" material for my short blogger profile.  I'm also a bit concerned that the back ground is too busy and makes the words difficult to read (although I really like the picture itself).
Posted by Brooke at 7/17/2012 10:21:00 AM No comments:

Rain is a Good Thing

I'm thankful for all the rain we've been getting this week.  Its really cooled things down and helped out my dad's garden.  His plants might make something after all!

I've got some changes in the works, but I'm a little low on creative energy so bear with me please.  In the mean time, check out my latest race report if you haven't already.  Also, I'd love to read your thoughts to any changes I might be making.

Email ThisBlogThis!Share to TwitterShare to FacebookShare to Pinterest
Labels: random

Sorry I'm a bit late on this race report!  As a result, I'm sure I will accidentally leave out important snippets along the way.  Between my mom and me, however, we got some pretty good pictures, so hopefully they will make up for the lack of fine detail. 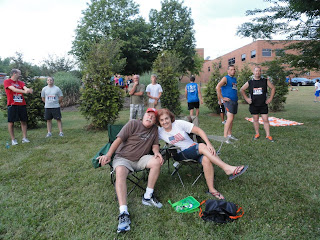 My parents decided to tag along - as always they made the racing experience all the more fun.  I snapped a few pre-race pictures, then took off on a warm up.  I ran into these guys along the way and just had to get a picture.  Being the heroes that they are, they couldn't say no to a photo op! 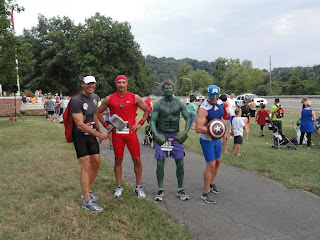 After another warm-up pass, it was time to line up.  I'm claustrophobic, and not a huge fan of crowds, so lining up was a bit difficult on me.  I like getting towards the front so I don't have to fight my way around people to pass, but I also enjoy NOT panicking/hyperventilating pre-race.  I settled on a mid-pack spot and waited for the gun. 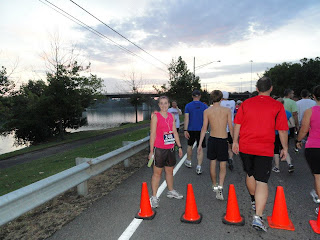 Race time temps were supposed to be in the high 80s, but one of the ladies I was lined up next to said it was mid 70s.  If that was the case the humidity had to be at a billion percent because it felt HOT!  Thankfully the race start time was 9 PM, so we at least didn't have the sun to contend with. 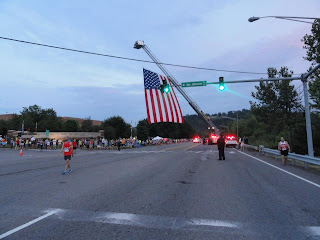 I tried to start off fast, but had to spend the majority of the first mile passing other runners.  Given the weather conditions, I wasn't hoping for a PR but I wanted to race my best.  This race is ran on the same road as my current PR and I very much enjoy it. 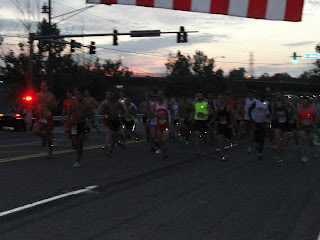 During the 2nd mile I expected traffic to ease up, but it really didn't.  I was still passing people as I made it to the turn around spot and headed back.  After a brief up hill spurt, the cluster broke up a bit by that point the exhaustion (from passing?  from the humidity?) had kicked in and I couldn't will myself to go any faster.

The next mile was more of the same.  The fire department had a truck along the course spraying us with water, but since I'd brought my iPod along I skirted the outside of the spray.  Bummer too, because I'm sure it felt great for all who ran through it.

I had told my parents to look for me between the 25 minute (a girl can dream, right?) and 30 minute mark.  No matter what I wanted this race to be sub 30, but beyond that I really didn't have a goal.  As I neared the finish line I saw my dad with a cowbell.  He immediately started ringing it and looking towards the finish line.

My mom wasn't with him, and I quickly figured out this was the system they had set up for him to signal her to get the camera ready.  Apparently they didn't do a great job of spacing themselves, because she ended up getting a picture of my back.  The picture looks horrid and makes me look much larger than I am, so I will not be sharing it.  I do, however, applauded their attempt. 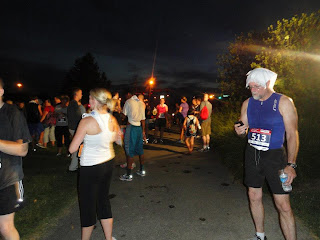 (this isn't the above-mentioned picture)


After crossing the finish line, racers were given a bottle of water and a cold, wet towel.  Add to that the Rita's Italian Ice in the snack line and I'd have to say this race had the best after party I've seen at a shorter distance.

You ask me; I ask you

I've been struggling to blog since the other site died.  I didn't back it up properly and I feel as if a year's worth of work was lost.  I suppose I feel that way because it was.  I guess I didn't realize just how much my blogging meant to me.

I enjoy working through heavy topics with input from my readers.  The support and encouragement I get from race reports pushes me on to my next fitness goal.  My daily thanks posts help keep perspective in my life.

What I can't decide, however, is where to continue this blog.  Hopefully you've found me since the blog went kaput.  (If not then I suppose you're not reading this blog and it doesn't apply to you.)  I've made a blog with the Frugal Trophy Wife name (only its a blogspot domain/blog) but can't decide if that's me or not.  If I'm honest, this blog doesn't feel like a good fit either though.

My questions for you:

Your questions for me:

Biyearly Knoxville's Repeat Boutique holds a clearance sale spanning the months of January and June.  Items begin to be sold at a 40% discount, followed by a 50% the next week, and finally 70% the final week of the sale.

The sale is a traditional for my family as well as others - each year we run into familiar faces.  The boutique has plenty of "repeat" customers (sorry, I couldn't resist!)

This year, I didn't manage to snag as many finds as normal.  I usually budget between $50-100 for each trip, and at 70% off consignment prices that's a big haul o'loot!

This isn't a commercial for them - promise!

I wanted to share with you a few of the goodies I snagged this year.  And yes, I was disappointed that I didn't get more.  For a grand total of $14.09 (9.5% TN sales tax included) I purchased the following: 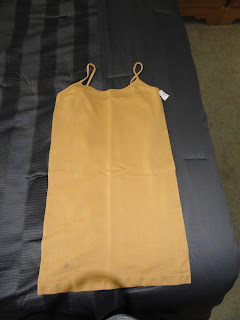 A gold undershirt/tank.
I'm of the opinion a girl can never have too many of these!  I'm not sure what I'll wear with this color, but for $2 it doesn't hurt to have it on hand. 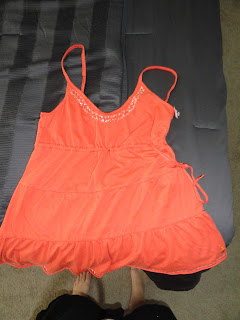 American Eagle tank
This one has a drawstring right at the chest - my smallest part.  I love it because it makes me look skinny while also hiding some of my pudges. 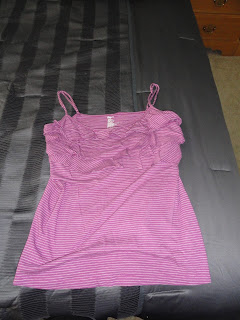 Gap tank
Once again, fitted at my smallest part - flowy everywhere else.  I'm probably wearing this one today, visiting a friend in South Carolina. (I'm traveling and this was scheduled so forgive me if I don't comment on your blog until next week!) 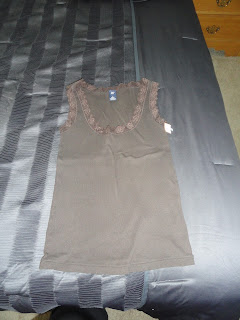 Gap brown tank
Nothing special about this one, but I have plenty of dresses/shirts that it will look great under.  These days I feel self conscious if I don't wear an undershirt. 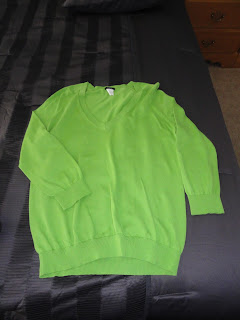 J. Crew Sweater
This was the most expensive purchase - double the $2 average price-per-piece.  The sweater didn't hardly look worn, and will be great for this summer in my over air-conditioned office.

Maybe I've read too much Jen Hatmaker or am too concerned about the lack of closet space in the new cabin.  Either way I saved some serious coin this time around only picking a few items.

What's the best deal you've ever gotten on a piece of clothing?  What's your shopping routine - do you shop for the fun of it, or out of necessity?

I hope you are spending this Independence Day with someone you love.  I'm taking the day off, but wanted to celebrate with you by sharing these videos.

The first is one I took after a Tennessee Smokies baseball game.  They are the Chicago Cubs AA affiliate and shoot off fire works every Friday night home game.  Here is just a brief clip:

The other is from one of my all-time favorite movies Independence Day.  As a side note, I loved Major Mitchell (aka Adam Baldwin) before I ever saw him on Chuck or Firefly.

Sadly (or am I awesome) I had this entire speech memorized.