Works for Me Wednesday - Reusing containers 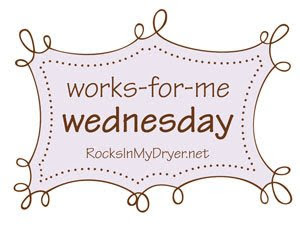 I would love to claim that this is all in an effort to "reduce, reuse, recycle" and it has that added benefit too. But I really get my motivation from being cheap.

Since Mr. Right is an only child of a SAHM, and he moved 6 hours away, when she comes to visit she loves to do things for him to show how she misses him. Service and Gifts are her two love languages. Every time she comes for a visit she leaves a stockpile of gatorade and snacks. Mr. Right LOVES gatorade. Soon-to-be-Mrs. Right has a grocery budget of less than $100 a MONTH, which does not leave room to give Mr. Right a gatorade (or two) for every day. And while he does like kool-aid, it doesn't offer the convience of being able to grab a bottle from the fridge on the way out the door.

Which brings me to my "green" tip. Once the gatorade that my dear future MIL purchased has been consumed, I load it in the dishwasher. I take the newly clean bottle and fill it with kool-aid. Even though Mr. Right knows that its kool-aid in the gatoraid bottles, he swears it tastes better like that than in a regular glass.

My MIL to be also got me started saving glass spaghetti sauce jars. She used them for leftovers, but I repurpose them a little differently. I have one glass jar that I use for milk. I never get up in time to eat breakfast before I leave the house, so I have my cereal (free cereal thanks to www.moneysavingmom.com links to coupons and deals) sitting at my desk as I'm going thru emails first thing at work. So I just fill the jar up with milk, that way it doesn't take up as much room in the cramped office fridge.

If I have extra of the glass jars, they are also perfect to drain the grease from browning hamburger meat. Just cap it and toss it. No need to worry about the garbage leaking because the lid is secure.

Email ThisBlogThis!Share to TwitterShare to FacebookShare to Pinterest
Labels: Works for Me Wednesda