I was attacked by a squirrel yesterday.

We had to return early from visiting the in-laws this weekend because Mr. Right had to work yesterday. Around 3 o’clock yesterday afternoon, he called me wanting to know how much my grandfather wanted for the cabin he has up for sale and where it was located.

From what he remembered of the cabin, it fit what his clients were looking for. He wasn’t sure how exactly to get out there, so my grandfather gave me the key and I met Mr. Right and his clients.

We unlocked the cabin and took them inside. No sooner had I walked in then something grazed my leg – a squirrel. It was running around crazy, going up the cabins and the wall and running across the kitchen table.

Mr. Right and I both thought that it had ran inside when we had opened the door, but the client had been standing at the door holding it open and said that it didn’t run in that way. Mr. Right grabbed a broom and used it to shoo the squirrel outside (knocking the blinds off into the kitchen sink in the process).

I went outside to speak with the wife and kids of the client, while Mr. Right took the husband upstairs to show him the rest of the cabin. All of a sudden I heard “there’s another one – get the kids out of the way!!”

Apparently the client was right. The squirrels had somehow found their way into the cabin.

Not quite the Mississippi Squirrel Revival, but close enough for me!

Surprisingly enough, I don't think they were interested in buying the cabin.

And so you don't think I'm just making this up (because sometimes even I wonder how all this crazy stuff happens to me), pictorial proof that the squirrel grazed the back of my knee...think I need a rabies shot? 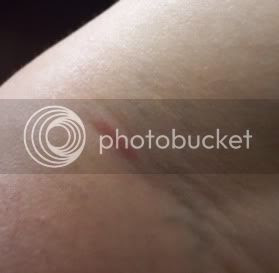