Works for Me Wednesday: Taco Bell 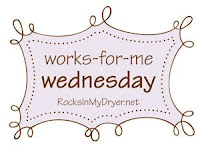 I tried to be a good meal planner as Mr. Right and I were closing on our new house. I did pre-cooking prep work on several different items (browning ground beef, cooking noodles to be reheated, cooking rice). And for the first week everything went well. Then Mr. Right started getting busy with his job (he works for himself so his hours are whenever he sets them). At that point our days over at the new house became very inconsistent. On days that he has clients interested in looking at property, I can't expect him to go over to the house and paint all day.

Making things worse, from day to day he's not sure when we'll be at the new house. Thankfully we have appliances now (the first week I was cooking on an electric skillet) but he's got the kitchen a mess from his painting that I wouldn't eat anything that was prepared in that disaster area.

Which brings me to what works for me - the Taco Bell value menu. I had asked him to get a frozen pizza out of the at his place freezer on his way to the house. But with a few things on his mind (like one contract he's writing up and another he's trying to finalize) he forgot to get our food. So instead, we stopped at Taco Bell. He got 3 $0.99 bean burritos and I got the $0.79 nachos and a $0.89 burrito (which was actually more than I could eat).

Not quite the $2.50 we would have had in our frozen pizza, but it was a good hot meal with no effort. And when it comes down to it, I'd rather spend $6 on fast food than loose several thousand on a contract falling through.

Email ThisBlogThis!Share to TwitterShare to FacebookShare to Pinterest
Labels: the big move, Works for Me Wednesda