This past weekend, Mr. Right had to work, but I went out with some friends to celebrate a couple's birthday (his was the 8th, hers was the 13th). Plans for the evening included dinner at a Japanese steakhouse followed by an 80s cover band concert.

Since he and I are on a tight budget, I felt guilty for spending $30 on dinner for myself. I could have saved $6 by getting chicken instead, but then I would have been wasting $24 on a meal I didn't enjoy.

I decided to go ahead and splurge and get the steak. The meal came with a chicken broth soup as well as a salad before the main course was served. I ate all of my veggies (with the help of some dipping sauce) before my steak and rice were done. By the time he served me my steak, I could only eat a few bites.

I was surprised at how much I had left to take home with me, and decided that I could make an entire meal for me and Mr. Right out of it. I got teased a little - because how can you make 3 meals out of 1?

I told them that I would get a bag of stir-fry veggies, boil them, and add them to the leftovers to make a complete meal. If that weren't enough, I would also serve salad with the meal. Thankfully, the birthday girl suggested I saute the veggies instead, and a meal plan was created.

What does this have to do with TILT? I officially love Kroger brand stir-fry veggies now. 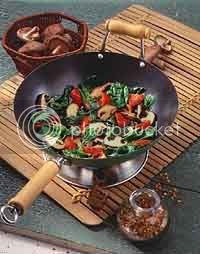 I sauteed them in butter, then added the leftovers to get the rice and steak warmed up. Supper was delicious!! I asked Mr. Right what he thought of having it in the future, maybe with teriyaki chicken next time instead of steak. He actually suggested that we just have the veggies and rice.

For a couple anti-veggie eaters, to create a meal solely around veggies (and teriyaki sauce of course) that's a great product! Not to mention a good price - they frequently go on sale $1 each. If I made 2 cups of rice and used two bags of frozen veggies we'd have $2.54 in the meal and plenty left to take for lunch the next day.

Now to price teriyaki sauce at the store...

For more Things I Love Thursday, check out the Diaper Diaries.